My PhD Dissertation, “Studies on Upward Flame Spread” has been published and is now available online.

Abstract of the Dissertation: 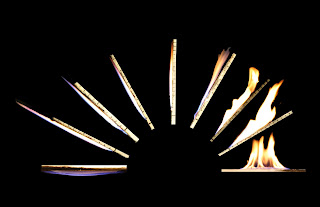 Experimental techniques have been used to investigate three upward flame spread phenomena of particular importance for fire safety applications. First, rates of upward flame spread during early-stage burning were observed during experiments on wide samples of corrugated cardboard. Results indicated a slower acceleration than was obtained in previous measurements and theories. It is hypothesized that the non-homogeneity of the cardboard helped to reduce the acceleration of the upward spread rates by physically disrupting flow in the boundary layer close to the vertical surface and thereby modifying heating rates of the solid fuel above the pyrolysis region. The results yield alternative scalings that may be better applicable to some situations encountered in practice in warehouse fires.
Next, a thermally thick slab of polymethyl methacrylate was used to study the effects of the inclination angle of a fuel surface on upward flame spread. By performing experiments on 10 cm wide by 20 cm tall fuel samples it was found that the maximum flame-spread rate, occurring nearly in a vertical configuration, does not correspond to the maximum fuel mass-loss rate, which occurs closer to a horizontal configuration. A detailed study of both flame spread and steady burning at different angles of inclination revealed the influence of buoyancy-induced flows in modifying heat-flux profiles ahead of the flame front, which control flame spread, and in affecting the heat flux to the burning surface of the fuel, which controls fuel mass-loss rates.
Finally, vertical arrays of horizontally protruding wood matchsticks were used to investigate the influence of the spacing of discrete fuel elements on rates of upward flame spread. Rates of upward flame spread were found to increase dramatically for spacings between 0 cm and 0.8 cm and experienced only a slight increase thereafter. Based on these observations, the influence of convective heating was hypothesized to dominate this spread mechanism, and predictions of ignition times were developed using convective heat-transfer correlations. Mass-loss rates followed a similar pattern and were predicted along with matchstick burnout times using a droplet burning theory extended for a cylindrical geometry.