Our paper on the Burning Behavior of Vertical Matchstick Arrays, by Michael Gollner, Yanxuan Xie, Minkyu Lee, Yuji Nakamura and Ali Rangwala was recently accepted for publication to the journal Combustion Science and Technology. A pre-print version of the article has been posted here: http://maeresearch.ucsd.edu/~mgollner/publications/2011_matchstick_cst.pdf 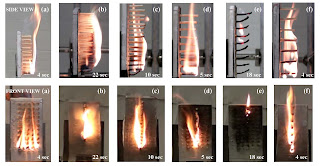 Vertical arrays of horizontally protruding wood matchsticks, 0.25 cm in diameter and 1.91 cm long, arranged from 1 to 5 matches across were used to investigate the influence of the spacing of discrete fuel elements on rates of upward flame spread. Vertical spacing’s between the matchsticks in the array (0.0, 0.6, 0.8, 1.0, 1.2 and 1.4 cm) were used to reveal the influence of separation distance on rates of upward flame spread, defined as progression of the ignition front, time to burnout and mass-loss rates. Advancement of the ignition front was found to vary linearly with time for the 0.0 cm spacing, while reaching nearly a $t^{1.7}$ advancement with time for the furthest-spaced arrays. Rates of upward flame spread were found to increase dramatically for spacings between 0 cm and 0.8 cm and experienced only a slight increase thereafter. Based on these observations, the influence of convective heating was hypothesized to dominate this spread mechanism, and predictions of ignition times were developed using convective heat-transfer correlations. Flame heights and mass-loss rates followed a similar pattern. Individual matchstick burnout times were observed to remain nearly constant for all cases at all heights except the zero-spacing case, which was nearly three times longer than in spaced arrays. This behavior in spaced cases was modeled using a droplet burning theory extended for a cylindrical geometry and solving for the time to burnout. A similar calculation was performed for the zero-spacing case relating it to vertical combustion over a wall. The average mass-loss rate for a single matchstick was also determined and used to predict the mass-loss rate of a spreading fire over matchsticks.