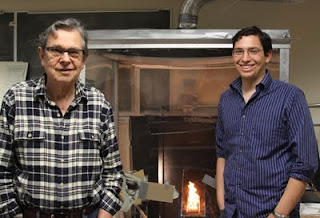 Work by Gollner, Williams and Rangwala was recently featured by the Jacobs School of Engineering at the University of California, San Diego. The work, assessing the upward flame spread characteristics of corrugated cardboard was recently published in the journal Combustion and Flame.

San Diego, CA, February 2, 2011–Imagine this: Firefighters enter a several football field-sized, 60-foot high, pitch-black warehouse and they can’t see inside—they don’t know if there is an inferno or a small fire with a lot of smoke. It’s a very dangerous situation, making choices hard. Engineers at UC San Diego have made a breakthrough discovery that could help ease these situations by predicting where and how quickly initial fires spread in warehouses. Results of this research were recently published in a paper called “Upward flame spread over corrugated cardboard” in the journal Combustion and Flame.
Despite many years of research, including the development of analytical and numerical models and extensive experimentation, the complexity of the process of upward flame spread continues to confound the fire-research community.
“Warehouse fires are definitely a big problem,” said Michael Gollner, co-author of the paper and a UC San Diego mechanical and aerospace engineering Ph.D. student. “It has been recently found that fully protected warehouses have burned down and that the sprinkler systems can’t always control the fires. We still don’t understand all the intricacies of this problem.”
In their research, Gollner and his team are focusing on the most commonly used packaging material in warehouses – corrugated cardboard— which has been found to affect predictions of upward flame spread by current descriptions. As part of the study of the combustion of boxes of commodities, rates of upward flame spread during early-stage burning were observed during experiments on wide samples of corrugated cardboard. The research stems from previous experiments Gollner performed focused on the burning of cardboard in collaboration with Ali Rangwala, a professor in the Department of Fire Protection Engineering at the Worcester Polytechnic Institute and a UC San Diego graduate.

“The flame didn’t spread exactly as was assumed so we did some further analysis on how the flame spread on a small scale,” Gollner said. “What we found is that the cardboard, while in the past was assumed to be a solid material, is actually not. There are different layers, and when it burns some of the cardboard actually peels up, so it slows the rate at which fire spreads. This is very important when you are determining how long it takes a fire to reach a sprinkler and trigger a water spray. At the initial phase, that’s when you can actually extinguish a fire most easily. Calculating the sprinkler activation times is really important in designing a warehouse protection system.”

Forman Williams, a UC San Diego mechanical and aerospace engineering professor and co-author of the paper, said the ultimate objective of this research is to help create better classifications of fire hazards in storing commodities and materials in warehouses.
The density and the number of sprinklers they use in a warehouse and the flow rates of sprinklers are determined by the classifications and categories of the packaging material. So we are trying to help determine what the criteria should be,” Williams said.
The engineers’ warehouse fire research, Gollner said, is appealing to the insurance industry and the national regulatory industry, including the National Fire Protection Association, all of which have a big priority in making sure warehouses are safe.
“One of thebiggest concerns is that these systems are designed for firefighter response; they are not made to put themselves out,” Gollner explained. “They are made to contain themselves until firefighters can enter. …Hopefully this will help become a part of new commodity classification standards in the future and in the way warehouses are designed. We hope to allow them to design warehouses safer not only to protect the goods in these warehouses but also the people who work in them and the firefighters who have to respond.”
Next on the researchers’ agenda is to conduct follow-on experiments looking at how fire spreads on surfaces at different angles, a project currently sponsored by the Society of Fire Protection Engineers, Educational and Scientific Foundation.
“We would like to understand better what controls the fire spread in different situations,” Williams said. “There are lots of things we really don’t understand, although fire has been around for a very long time.”